I can’t remember exactly when I first read Julie Guthman’s article “The Food Police: Why Michael Pollan Makes Me Want to Eat Cheetos.” (Cheetos are my all-time favorite snack, so I couldn't help but fall for the title).  I was relieved and excited to hear that someone else felt uneasy with the “food revolution” Pollan seemed to be spreading. Let me be clear, it really wasn’t Pollan,the man, that was bothering me. He was a stand in for my concern with food revolution rhetoric as a whole.  So what, you ask, is my problem? It is true, I do  have a contrarian impulse that makes me push against anything that becomes a “thing,” a thing that everyone preaches and follows without much reflection. But more thoughtfully, I sensed that what Pollan proposed as the answer to America’s “food problems”--that is local, organic consumerism, provisioned by small farmers like Omnivore’s Dilemma’s heroes, Joel Salatin and George Naylor—was generally only available to Americans in his social/economic class. His answer resonated with the well-off who longed for a certain type of consumer experience and a certain kind of moral/environmental life. But I never heard him honestly grapple with the class and racial exclusiveness of this solution that he pitched as universally correct.

And every time I read one of his new articles on food, he pushed another one of my buttons. This was the case when I fell on his 2009 NY Times piece Out of the Kitchen and on to the Couch.
The premise of this article is that Americans are watching cooking on TV more than they are actually cooking, and that this is bad for us.  While this conjecture in and of itself is debatable and depends on a narrow definition of what constitutes “cooking,” his comparison of Julia Child and Betty Friedan made me see red.  Basically, he claimed that Betty Friedan’s Feminine Mystique made women hate cooking. Julia Child, on other the other hand, approached cooking with pleasure and creativity. She, not Friedan, should have been the model for women in the 1960s.  Boom, there it was. Feminism, bad; Gourmet cooking, good!  Feminism killed the family dinner; French gastronomy could save it. Yes, I know that is an over-drawn simplification of his argument, but I don’t think it is entirely off base.

I wrote an article in Ms. Magazine, titled Back to the Kitchen, about the back-handed anti-feminism I saw in this article. To summarize, I argued that working women have never had much time to express their cooking creativity. They have pieced together dinner from take-out, deli goods, and left-over breakfast, since at least the mid-nineteenth century.  Betty Friedan and second wave feminism had nothing to do with those pragmatic decisions. Also many women didn’t need the Feminist Mystique to learn to hate cooking. They hated it well before Sixties feminists began to point out the gender politics of household labor. In general, my article questioned the idealized farming and family past to which many food revolutionaries want us to return.

Julie Guthman’s Cheetos article opened space up in the public forum for this critical engagement. I’m sure she will take us in new and provocative directions when she speaks at our Food in the Public Square Community Conversation on May 20th. Please check the website's events tab for more on this day’s schedule.

Food in the Public Square Opening Event: Friday, May 20

If you are in or around Bethlehem Pennsylvania on May 20th, you may be interested in the opening forum for our FOOD IN THE PUBLIC SQUARE project.  Julie Guthman will give the keynote address. She writes about organic agriculture and the alternative food movement.  I love both of her books, Agrarian Dreams:  The Paradox of Organic Farming in California  and  Weighing In: Obesity, Food Justice and The Limits of Capitalism  and pushed to have her as our opening speaker!

I will update you about the specifics of her talk and mine in the scholars panel that follows.

Robert Rodale and The Cornucopia Project 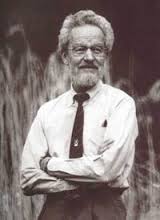 On June 7th, 1971, J.I. Rodale died of a heart attack during a taping of the Dick Cavett show.  After boasting to Cavett that he would live to the age of 100, when the show went to break Rodale slumped over in his chair and died shortly thereafter.  Robert Rodale, who had been president of Rodale publishing since 1954, would now be the figurehead for the company and for the organic agriculture and preventative health movements.   Fortuitously, he took control in the period when Rodale magazines, which had labored largely in obscurity under J.I.’s leadership, were now capturing the attention of countercultural communalists and back-to-the-landers.  Between 1968 and 1971 Organic Gardening and Prevention readership had doubled.


To get out from under his father’s looming shadow, Robert Rodale came up with a whole series of programs and ideas that distinguished his organic vision from his father’s.  As he stated in 1976 “I’m quieter, perhaps more introverted [than my father] and I have a concept of organic living—a simpler more conservative way of life.”  Responding to America’s recessionary economy and the early 1970s OPEC oil embargo, Robert argued for local self-sufficiency with the “Regeneration Project” and the “Cornucopia Project.”  Combined these plans proposed regional food, energy, and retail independence from the global commercial network.

The similarities between Robert Rodale’s ideas and the contemporary “food revolution” are striking.   In a 1980 Organic Gardening editorial, Rodale explained that the intent of the “Cornucopia Project” was “to create a sustainable food system that is not only organic farming but a regionalization of the food system based on fresh foods and foods that are in season.” In a 1981 editorial titled “The New Diet that Works,” Rodale pitched  “a new diet for all the people in this region—heavy, thin, rich, and poor. We call it the Local Diet.”  Sound familiar? If you are an optimist, you might see Rodale as the prescient and unrecognized father of “localism,” an idea that took time to catch on. If you are a pessimist, you might see current “localism” as a recurring aspirational theme in the American cultural imagination that comes and goes with uncertain impact on the broader economic system. You decide.
Posted by Maria at 6:49 AM No comments:

Did you know this about America's favorite integrative health doc, Andrew Weil? 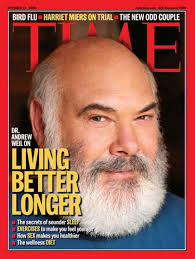 Did you know that the Santa Claus-bearded, Andrew Weil, was an undergrad in biology and ethnobotany of medicinal plants at Harvard when Timothy Leary was tripping with his psych. grad. students...ahem...I mean, when Leary was conducting psychological experiments in the Harvard Psilocybin Project??

In fact,Weil volunteered to be a subject in Leary and Richard Alpert's studies. Leary declined since Harvard had just put the hammer down on undergrad participation, but suggested that Weil do his own experiments.  After struggling to find a drug source,Weil decided to contact Aldous Huxley. Weil had read Huxley's Doors of Perception in high school and thought the elder statesman of altered states, might know where to get some stuff.  Huxley suggested Delta Chemicals; the company kindly provided Weil and fellow undergrad., Ronnie Winston, with a stash of mescaline. Weil and Winston conducted thirty experiments on themselves and other undergrads.

Weil wrote several articles in the Harvard Crimson on the Leary/Alpert experiments. In The Harvard Psychedelic Club, Don Lattin  argues that Weil, jealous that his friend Ronnie Winston had been invited into Leary/Alpert psychedelic circle, cast doubt over the Leary Alpert work, accusing them of cultivating a "cult of chemical mystics" in an article in the Harvard Crimson. Later in a 1963 Look magazine article, Weil went so far as to cast homophobic aspirations on Leary and Alpert (he wasn't entirely off-base; Alpert was bi-sexual in this period).

Anyway, Weil dove deep into his own experimentation. Even while getting his MD at Harvard, he remained fascinated by altered states. He thought drugs (and later non-illicit practices and substances, such as "ecstatic mango eating")  might be the key to opening up a new level of consciousness, a consciousness that would bring on the revolution.

Weil had been turned on, but unlike Leary, he decided to keep one foot in the counterculture and one foot in respectable culture. He doesn't openly admit it anymore, but at one point, Weil recommended tripping as a remedy for allergies and cancer.  (To be continued...)
Posted by Maria at 12:26 PM No comments:

Historians can be pretty annoying bunch.  Trained to see recurring themes over time, déjà vu is our steady state.  More annoyingly, we feel obligated to alert everyone to the unoriginality of their thoughts, their aspirations, and their experiences. Maybe,sometimes, we over-exaggerate   similarities through time. But we aren’t always wrong.   Occasionally social trends glare so familiar, we can’t leave them alone. For me “local” is just such a case.  When I see a “buy local” sticker on a passing Prius, voices from the past speak to me.  In that motto, I hear the echoes of centuries of anti-modernism.  And I hear a heartfelt  American (particularly bohemian) longing for self-determination, authentic existence, and intense group affiliation. I also hear the siren song of politics built through personal choices and behaviors.

Localism first appeared in the motto "think globally, act locally" in late 1960s. Later in it appeared in the call for the 100 mile diet.  Global and local were a weave in these first conceptualizations.  But once the local notion hit the elite mainstream, in the form of farm-to-table, CSA, small batch consumerism, the thin tether that connected the small scale to the globe stretched ether-thin.  The end became the food and food became the end.  Sure, the helium balloon of anti-global politics bobs and swoops lightly above the heads of “localism” aesthetes chowing on free-range pork-loin with a side of scavenged fiddlehead ferns and cider braised spring ramps. But ultimately, the true pleasure of a local event (or local allegiance) is to see and talk to a “real farmer” to eat “real food” and clink glasses with others who want the same.  It goes without saying that the pricey exclusivity of localist events, markets, and food IS the ding an sich-the thing in itself. In a hyperconsumptive culture, where identity is what one buys, authentic existence is often acquired with a debit card.

WHEN I HEAR LOCAL I HEAR:
I hear Thomas Jefferson and yeoman farmer idealism.

I hear progressive era reformers Jane Addams and John Dewey and Randolph Bourne who longed to create localism in the heart of the modern city of Manhattan.

I hear the Beats who heroically struggled not to be swallowed  by the anonymity of  Allen Ginsberg’s “supermarket America”.

And I hear the most recent ancestors of the local movement: the 1960s counterculture—in communes  from the “Haight” to the Adirondacks and in experimental collective businesses.

Localism critics Julie Guthman and Melanie Dupuis rightly warn us to be careful with un-reflectively privileging the word and idea “local.”  Local, in and of itself, while a powerful part of our national imagination, is not a place and not a solution.

Back To The Kitchen?


I guess I forgot to post that I had an article in Ms. Winter 2013 issue on anti-feminism in the Food Revolution. I would post it, but they don't have it on the web.  Maybe you can go to your local newstand and ask for this issue? Ha, ha, funny stuff right?

If you are really interested let me know, and I'll see what I can do.